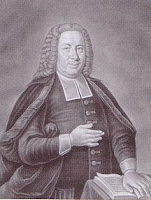 The first known translations of the Bible into the Lithuanian language appeared in the middle of the 16th century following the spread of the Protestant Reformation. The full Protestant Bible was first published in 1735 in Königsberg (Kaliningrad). This translation was sponsored by Lutheran Johann Jakob Quandt (1686-1772) and was prepared by joint Lutheran and Calvinist efforts. This translation was later edited by Ludwig Rhesa (1816), Frydrichas Kuršaitis (1853), and Adomas Einoras (1897).