Jesse Ramsden was born October 6, 1735 (he died November 5, 1800). He was an English astronomical and scientific instrument maker.
Born at Salterhebble near Halifax, West Yorkshire, after serving his apprenticeship with a cloth-worker in Halifax, he went in 1755 to London. In 1758 he was apprenticed to a mathematical instrument maker. About four years later he started his own business and secured a great reputation.
He created one of the first high-quality dividing engines. This led to his speciality in dividing circles, which began to supersede the quadrants in observatories towards the end of the 18th century. His most celebrated work was a 5-feet vertical circle, finished in 1789 and used by Giuseppe Piazzi at Palermo in constructing his catalogue of stars. He was the first to carry out in practice a method of reading off angles by measuring the distance of the index from the nearest division line by means of a micrometer screw which moves one or two fine threads placed in the focus of a microscope.
Ramsden's transit instruments were the first which were illuminated through the hollow axis; the idea was suggested to him by Prof. Henry Ussher in Dublin. He published a Description of an Engine for dividing Mathematical Instruments in 1777.
Ramsden is also responsible for the achromatic eyepiece named after him, and also worked on new designs of electrostatic generators. He was elected to the Royal Society in 1786. The exit pupil of an eyepiece was once called the Ramsden disc in his honour.
In about 1785, he provided a new large theodolite for General William Roy of the Royal Engineers, which was used for a new survey of the distance between Greenwich, London and Paris. This work provided the basis for the subsequent Ordnance Survey of the counties of Britain. With Roy he received the Copley Medal in 1795 and died five years later at Brighton.
No comments: Situated in Lyme Regis and built in 1735, for the Dowager Countess Poulett and later the home of the Duc du Stacpoole, the Alexandra became an hotel in 1901. It stands in magnificent grounds overlooking the sea and the famous Cobb harbour.
No comments:

Today Richard-Ginori is one of the world leading manufacturers of luxury tableware. They deal in genuine chinaware, combining a mixture of tradition with advanced technologies, seeking highest quality in its products.
The story of Richard-Ginori manufacturing started just outside the city of Florence in the village of Doccia when 35 year old Carlo Ginori decided to bring to Florence the magnificence of the Medicean artistic tradition. It was 1735, when the rich families of Europe collected rare porcelain pieces fired in the kilns of Vienna and Meissen, that Carlo Ginori began his admirable adventure. Recruiting the best workers of the Saxon manufacturers, the Doccia firm asserted itself from the start with the extremely fine quality of its products. After 1735, the activity continued, increasing the production and making use of the creativity of a variety of collaborators. At the end of the following century the Ginori family handed the factory over to the Milanese industrialist Augusto Richard, the owner of a ceramic business in Milan. The present company was born from this merger. More here.
No comments: 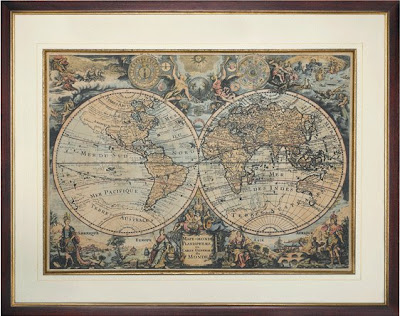 The world map above is apparently from 1735. 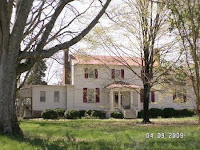 Locust Level was built around 1735 in Cumberland County, Virginia, USA. Estate agents say this stately frame home has on the first floor, a living room with a fireplace, formal dining room with a fireplace, kitchen, den with a fireplace, entrance foyer, large office utility room and a full bath. This floor retains the original wide flooring chair rail, wainscoting, mantels, high ceilings and large door locks. There are two stair cases to the second floor. This floor offers four bedrooms, three with fireplaces and wood floors. The master bedroom has an attached master bath with a whirlpool tub.
No comments:

The Foster-Meeker Homestead is probably the oldest home in Westhampton Beach. It is an 18th-Century Cape Cod-style house built in 1735. It was moved to its present location last year and is the first village structure listed on the New York State and national historical registers. Efforts are currently being made to preserve the structure. This will be a costly undertaking.
More here.
No comments:

Fyodor Stepanovich Rokotov (Fedor Rokotov) was born around 1735 (some say 1736) and died in 1809. He was a distinguished Russian painter, specialising in portraits.
Rokotov was born into a family of peasant serfs, belonging to theRepnions. Much in his biography is obscure. He studied art in St Petersburg and after buying back his freedom in the late 1750s became established as a fashionable painter.
In 1765, he was elected an Academician but did not work as a professor in the Academy long, because it interfered with his painting. He returned to Moscow 1765, where he lived for the rest of his life. He had many commissions there, becoming one of the best portrait painters of his time.
Among his best-known portraits are those of Alexandra Struyskaya (1772) (sometimes called the Russian Mona Lisa) and admittedly the most celebrated piece of the 18th-century Russian painting; of Countess Elisabeth Santi (1785) and Lady in a Pink Dress (1770s) - see pic.
Rokotov avoided painting formal portraits with lots of adornments and decorations. Instead he was one of the first Russian painters to advance the psychological portrait with attention to optical and atmospheric effects.
More here and here.
No comments:

On February 18, 1735, the first recorded opera was presented in America. "Flora, or Hob in the Well," by Colley Cibber (1671-1757) and John Hippesley (d 1748) was performed in a court room in present-day Charleston, South Carolina.
No comments:

On January (or was it February) 19, 1735, Alexander Mack died at his home in Germantown, Pennsylvania. Sometime before his death, he had said to his sons, “Now when I am gone, don’t mark my grave, or they might sometime want to erect a monument....” Mack’s sons were distressed and protested to their father. At last Mack agreed to allow them to mark his grave with a small slab.
Mack was buried in a community cemetery which was later abandoned. In 1894 his remains were moved to the cemetery at the back of the mother church in Germantown where six generations of his descendants are also buried.
Mack was the founder of the Church of the Brethren in Schwarzenau in Germany, in 1708. He was born in Schriesheim in 1679. He was a miller by trade. More here.
The Brethren movement began as a melding of Pietist and Anabaptist ideas. The first of its churches in America was established in 1723. These churches became commonly known as German Baptist Brethren. The denomination holds the New Testament as its only creed. Historically the church has taken a strong pacifist stance. Distinctive practices include baptism by immersion; a threefold Love Feast consisting of feetwashing, a fellowship meal and communion; anointing for healing; and the holy kiss. More here.
No comments: