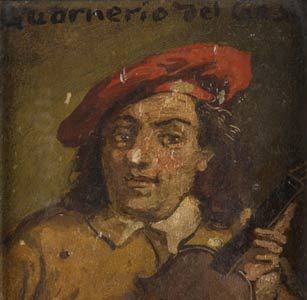 Bartolomeo Giuseppe Guarneri del Gesù (1698-1744) is the only luthier to rival Stradivarius (1644-1737) with regard to the respect and reverence accorded his instruments. He has been called the finest violin maker in the Amati line.
He is known as del Gesù because his labels incorporated the nomin sacra, IHS (iota-eta-sigma) and a Roman cross. His instruments diverged significantly from family tradition, becoming uniquely his own, and are considered second in quality only to those of Stradivari. Some argue that they are superior.
The most illustrious member of the Guarneri family of violin makers, he was the son of Giuseppe Giovanni Battista Guarneri, the grandson of Andrea Guarneri, both noted violin makers as well. Andrea learned his trade as an apprentice of Nicolo Amati, as was Stradavari.
In 1735 Giuseppe produced somewhere around 17 violins still extant. These include the Lafont, Ladenburg, Sennhauser, King, D'Egville, Plowden, Charden and David.