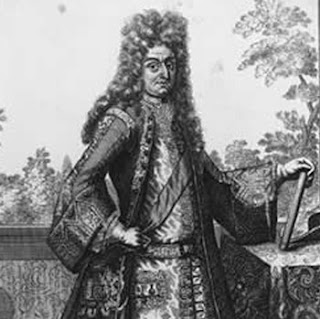 Johann Philipp Krieger was born in 1651 and died July 18, 1735. Krieger was a German Baroque composer who, although not prominent, contributed quality music (such as keyboard music,trio sonatas and operas) to the 17th and 18th Century world.
As a young boy he studied with Drechsel and Joachim Schutz in Nurnberg. In his teens he studied for nearly five years as a pupil of Schröder and Förster. After returning to his home in Bayreuth he served as organist, while the Nurnberg Council promised him the first available position.
He travelled to Italy in 1673 and studied in Venice with Johann Rosenmuller and Volpe. In Rome he studied with Abbatim and Bernardo Pasquini. In 1675 he performed for Leopold I at Vienna, and was ennobled by him. He later returned to Bayreuth, and shortly thereafter visited Frankfurt and Kassel, refusing job opportunities in both places. At Halle, in 1677, he was named chamber musician and organist, became Vice-Kapellmeister in 1678 and Kapellmeister when the court moved to Weissenfels in 1680. The court’s musical establishment soon became one of Germany’s greatest. A catalogue of vocal works performed there lists over 2,000 of Krieger’s compositions along with hundreds of works by his brother Johann and other German and Italian composers.