It has been said that the story of Welsh Presbyterianism begins in the year 1735 with the conversion of two men, Daniel Rowland and Hywel Harris (1714-1773). To adapt a piece by Richard Holst 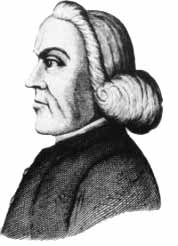 From the year of his birth (1714 in Talgarth, Breconshire) until 1735 Howell Harris' story is wholly unremarkable. His formal education began in 1725 at a nearby elementary school. In 1728 he graduated to the academy at Llwynllwyd and completed his secondary education with competence rather than distinction. In spite of this the young man considered his familiarity with history, politics, games, and the like, ample qualification to be 'the most interesting of companions'! He was an all-or-nothing kind of person, capable, on the one hand, of throwing himself into amusements and youthful mischief and of sinking into deep melancholy, on the other. We see something of this propensity when, after his father's death in 1730, he became schoolmaster at the small township of Llangors, a place of doubtful reputation, not far from his home. While there, he neglected the classics in favour of plays and set about becoming the life and soul of every party. He was also an implacable enemy and mocker of the local Nonconformists. A man of extremes!
His time at Llangors troubled him long after his conversion. He called it, 'the place where I first broke out in the devil's service' and later reminded his erstwhile friends that many of them used to go with him towards hell. Once, when preaching there, he said, "God's grace must have been free, or else I would not have received it, because I was the worst of you all." An occasional sermon might create a momentary crisis and he once dreamt that he stood before the judgment-seat of God, but such reflections produced only fleeting resolutions to mend his ways, and attempts to pray. "I tried to turn to God in my own power" he said, 'but did not succeed until the day of His power came.'


By the age of 21 he was entertaining thoughts of the Anglican ministry but as yet had not managed to attend a single service of Holy Communion, whether out of indifference or a tender of conscience, we are not told. But God's ways are not ours! On March 30, 1735, the Sunday before Easter, the vicar of Talgarth, Rev Pryce Davies, announced that the following Lord's Day he would celebrate Holy Communion. He read the formal exhortation from the Prayer Book and came to the words, "Therefore our duty is to come to these holy mysteries with most hearty thanks to be given to Almighty God ..." Looking up he said, 'You plead your unfitness to come to the Holy Communion. Let me tell you, that if you are not fit to come to the Lord's Supper, you are not fit to live, you are not fit to die."
The logic was impeccable. If we are unfit to draw near to God, we abide under his wrath and are not fit to live or die. Harris knew at that moment that he that he was unfit to meet his God and resolved that he would attend Holy Communion on Easter Sunday without a bad conscience. On his way home that morning he called on a neighbour with whom he had quarrelled and made it up with him. All the following week he kept himself from his usual sins and anything else he considered inconsistent with a religious life. Thus began his attempt at personal, moral reformation.
Next Sunday came and he presented himself at the Lord's Supper more at ease with himself than before, that is, until the vicar began reading the general confession of sins. Howell recited the words after him, 'We acknowledge and bewail our manifold sins and wickedness ... which we have committed by thought, word and deed ... provoking most justly your divine wrath and indignation against us. We do earnestly repent, and are heartily sorry for these our misdoings; the remembrance of them is grievous to us ...' Bewail, repent, heartily sorry for our misdoings ... grievous to us? All this was humbug; he was telling lies to God! His sins were not grievous, and he did not bewail them. He knew that the guilt of the previous Sunday had been a passing discomfort, and that if the truth be told, he didn't feel any real burden at all!
It was enough to drive him from the Lord's Table, but an ameliorating thought entered his head; he had honestly and sincerely tried to change his life and be as good as it was possible for him to be. He had done all that God could reasonably expect of him, and God is not unreasonable. Armed with the spurious comfort of a duty performed and seemingly with a clear conscience, he partook of the Holy Communion for the first time in his life.

Beginning is easier than continuing - especially when you are trying to do it in your own strength! After momentary elation Harris found himself in the depths of despair. On April 20, someone gave him a 'Book on the Commandments written by Brian Duppa'. It seemed to do him no good; the more he read the more sinful he felt himself to be and the more depressed he became. 'By the law comes the knowledge of sin!' God was showing him the 'exceeding sinfulness of sin' and he found the experience exceedingly painful. Nevertheless the book, which plunged him into despair, also showed him the way forward. Having tried to put himself right with God he now understood that he needed God to settle accounts for him. The Law of God had driven him to rely on the Son of God, who is' the end of the Law to all who believe.' Attendance at Whitsun communion was quite different because his confession was true and heartfelt. He had been to Jesus Christ for forgiveness. Through faith in him he was now fit to live and die.
The effect was more or less immediate. Harris began 'exhorting' whoever would listen to him, and others who would not. No period of preparation 'in Arabia' was necessary, though, as he later admitted, he knew nothing. But having been to the 'Fountainhead', and feeling the compulsion of his experience, he plunged himself into urging others to be reconciled to God. Those close to him were shocked, and by the following November had packed him off to Oxford 'to cure him of his fanaticism'. But Harris was now God's man and being unable to tolerate the worldliness and immorality of university life, he remained there barely a week before returning to Breconshire.
Thus by 1736 his bold witness was attracting large audiences. He wrote, 'a strong necessity was laid upon me, that I could not rest, but must go to the utmost of my ability to exhort. I could not meet or travel with anybody, rich or poor, young or old, without speaking to them of religion and concerning their souls'. Family gatherings turned into congregations so large that ordinary dwellings could not accommodate them. Family worship was instituted in many homes and churches in the neighbourhood became crowded, with many seeking admission to the Lord's Supper. The Evangelical Awakening had begun.