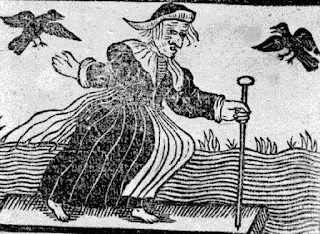 England's most notorious Witchcraft Act, making witchcraft a felony, was passed early in the reign of Elizabeth I (1563) and was strengthened in 1604 by her successor James I.
A new witchcraft act was passed under George II in 1735. It marked a complete reversal in previous attitudes. No longer were people to be hanged for consorting with evil spirits. Rather, a person who pretended to have the power to call up spirits, or foretell the future, or cast spells, or discover the whereabouts of stolen goods was to be punished as a vagrant and a con artist, subject to fines and imprisonment.
In 1944, Helen Duncan was the last person to be jailed under this act, on the grounds that she had pretended to summon spirits . She spent nine months in prison. She was not, as is frequently stated, the last person to be convicted under the act this as Jane Rebecca Yorke was convicted later that year. The the last threatened use of the Act against a medium was in 1950. In 1951 the Act was repealed with the enactment of the Fraudulent Mediums Act 1951, largely at the instigation of Spiritualists through the agency of Thomas Brooks MP.
It is widely suggested that astrology was covered by the Witchcraft Act. From the 1930s onwards many tabloid newspapers and magazines carried astrology columns but none were ever prosecuted. The Witchcraft Act was still legally in force in the Republic of Ireland, although it never was actually applied. Most old English laws were repealed 16 May 1983.

NY Times 3 Apr 1944 PM Churchill to his Home Secretary:
"Let me have a report on why the Witchcraft Act, 1735, was used in a modern court of justice. What was the cost of this trial to the State? ....