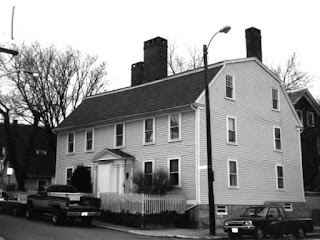 Driving down Derby Street in Salem Massachusetts, it’s easy to miss this house. There are no signs along its fence that draw attention to it, nor is it part of the Salem Maritime National Historic Site. It sits off Derby Street at 27 Herbert St. Yet, this house and its occupants really were the catalyst for the development of this area that would later become the national historic site.
The land and building on it dates back to the 17th century and attest to the continuing focus of Salem on the ocean and trade.
There were house lots here in the mid 1600s with frame dwellings for a succession of mariners into the early 1700s. In 1713, John Gardner sold the property to John Langsford whose heirs sold what was then considered the Langford Estate consisting of a dwelling, bake house, shop and barn to James Lindell for £400 in 1734. He in turn sold the property to Captain Richard Derby in Sept 1735 for the same amount.
Captain Richard Derby (1712 -1783) first captained a vessel in 1735 at the age of 24. That same year, he married Mary Hodges. This house is believed to have been built in 1735-1736. It appears that he had the other buildings removed. Captain Derby added land to his house lot by lot, buying land from the Pickman family a few years later.
Captain Derby continued to captain ships for the next 21 years. Having success on the seas, he allied with Timothy Orne during the 1740s, in an effort to increase his wealth through maritime investment. More here.
No comments: