Wesley to his mother

To his Mother
OXON, January 13, 1735
DEAR MOTHER, -- Give my leave to say once more that our folks do, and will I supose to the end of the chapter, mistake the question.
Supposing him changed? Say they. Right: but that supposition has not proof yet – whether it may have: when it has, then we may come to our other point, whether all this be not providence, i.e. blessing. And whether we are empowered so to judge, condemn, and execute an imprudent Christian, as God forbid I should ever use a Turk or Deist.
I have had a great deal of a conversation lately on the subject of Christian liberty, and should be glad of your thoughts as to the several notions of it which good men entertain. I perceive different persons take it in at least six different senses: (1) For liberty from willful sin, in opposition to the bondage of natural corruption. (2) For liberty as to rites and points of discipline. So Mr. Whiston says, though the stations were constituted by the Apostles, yet the liberty of the Christian law dispenses with them on extraordinary occasions. [William Whiston (1667-1752) succeeded Newton as Lucasian Pro­fessor in 1703. The reference is to his book, The Primitive Eucharist Revived; or, an account of the doctrine and practice of the two first centuries. The ' stations' were the fasts: see letter of June 13, 1753, n.] (3) For liberty from denying ourselves in little things; for trifles, 'tis commonly thought, we may indulge in safety, because Christ hath made us free. This notion, I a little doubt, is not sound. (4) For liberty from fear, or a filial freedom in our intercourse with God. A Christian, says Dr. Knight, [James Knight, Vicar of St. Sepulchre's, London. See letter of May 8, 1739.] is free from fear on account of his past sins; for he believes in Christ, and hope frees him from fear of losing his present labor or of being a castaway hereafter. (5) Christian liberty is taken by some for a freedom from restraint as to sleep or food. So they would say, your drinking but one glass of wine, or my rising at a fixed hour, was contrary to Christian liberty. Lastly, it is taken for freedom from rules. If by this be meant making our rules yield to extraordinary occasions, well: if the having no prudential rules, this liberty is as yet too high for me; I cannot attain unto it.
We join in begging yours and my father's blessing, and wishing you an Happy Year. -- I am, dear mother,
Your dutiful and affectionate Son.
To Mrs. Wesley, At Epworth. To be left at the Post-house in Gainsborough. By London.
As found here.
No comments: 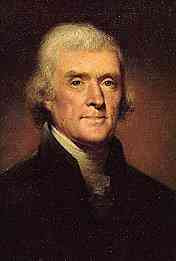 Elizabeth "Betty" Hemings was born around 1735, somewhere west of Monticello, Albemarle County, Virginia, now USA. She was an American slave owned by Thomas Jefferson (see pic), said to have been the concubine of Jefferson's father-in-law John Wayles, from whom Jefferson inherited her and her family. Over 75 of her children, grandchildren and great-grandchildren were enslaved at Jefferson's estate in Monticello.
According to the oral history of her descendants, Betty was the daughter of a slave-ship captain named Hemings and a woman born in Africa. Her place of birth is uncertain, but by the 1740s she was the property of Frances Eppes IV, of the Bermuda Hundred plantation, whose daughter Martha Eppes was to become John Wayles first wife.
Betty's grandson, Madison Hemings, related the story that Betty was already the property of "John Wales" at her birth, and her father Captain Hemings attempted to purchase her from Wayles, but Wayles refused because he was curious about how a mulatto child would develop. Captain Hemings then plotted to kidnap his daughter, which Wayles got word of, and took measures against. This account appears to contradict the documentary evidence pertaining to Betty's birth and early life, though it is possible that Wayles could have sold Betty to Frances Eppes, and later regained ownership of her via the dowry of Eppes's daughter, or that Madison's chronology is incorrect and the incident, if it occurred, happened later.
After the marriage of John Wayles and Martha Eppes 1746, Elizabeth became the property of Wayles, and was moved to one of his plantations, where she became a household servant. In the 1750s she gave birth to the first four of her 12 children, whose paternity is unknown.
John Wayles had three wives, all of whom pre-deceased him. In 1761, after the death of his third wife, Wayles took Betty Hemings as his concubine. According to her descendants, she had six children with Wayles including Sally Hemings (thought to have had a child with Jefferson). Wayles died 1773, and all 11 members of the Hemings family became the property of Thomas Jefferson.
Jefferson gave the Hemingses privileged positions as artisans and household servants. No member of the Hemings family ever worked the field. While resident at Monticello, Betty gave birth to another son, John, whose father was an Irish workman.
Betty had her own home at Monticello, where she spent roughly the last decade of her life, 1795-1807. Hemings sold cabbages, strawberries and chickens to Jefferson while she lived there. Her former cabin is now an archaeological site.
Relationship with John Wayles
Historians have tended to accept the account that Betty Hemings and John Wayles had children together, although, as in the case of many relationships between slave-owners and slaves, documentary evidence is slight. Betty was mentioned in John Wayles will, which some take as an indication of a relationship. Some of Betty's children, according to contemporary accounts, were nearly white. Other support is found in gossip from the first decade of the 19th century, which manifested itself in a few private letters which eventually became public. The accounts of former slaves Isaac Jefferson and Madison Hemings are the most well-known sources for the relationship.
(From Wikipedia)
No comments:

In the memoir of Rev F C Schwartz, apparently there is a record of his being sent by the East India Company as an emissary to negotiate with Haidar Ali in 1779. There mention is made of the Kabini bridge built by Dalvoy Devaraj in 1735 over the river Kabini. Surprisingly, the bridge is intact even now. The structure, built with stones, bricks and sand is 10-12 metres in width and has a narrow gauge rail track (no longer used) and a tarred road. It has been established as the oldest railway bridge in the world. There is currently talk of redeveloping the historic site. The bridge is near Nanganjud in Mysore, Karnataka, India.
2 comments: