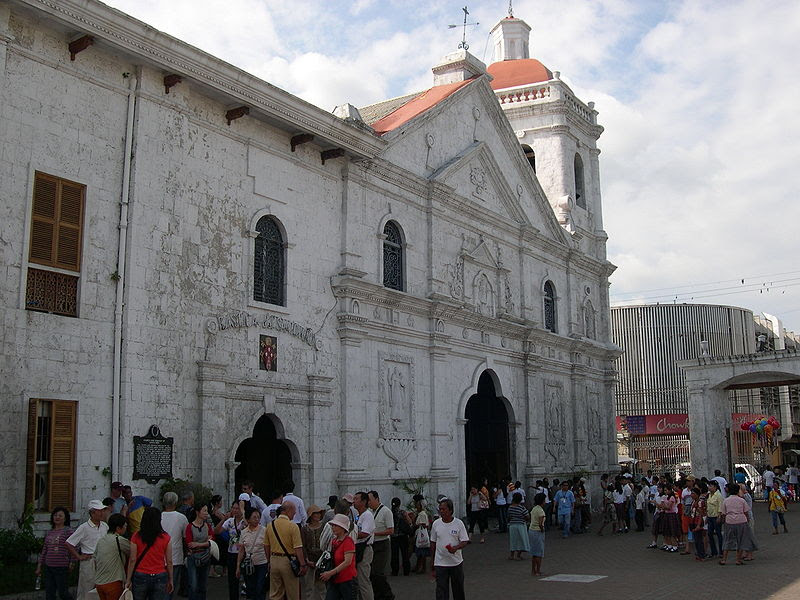 The Basilica Minore del Sto Niño is the centre of the oldest Romanist devotion in the Philippines. It houses the image of the Sto Niño de Cebu, a representation of the infant Jesus, brought by Ferdinand Magellan in 1521.
Three churches preceded the present one. The first, by Fr Diego de Herrera, made of nipa and wood burnt down, 1566. The next, also of light materials, by Fr Pedro Torres burnt, 1628. The third, of bricks and stones, was started by Fr Juan de Medina. It fell down, 1629.
On February 29, 1735, Fr Juan de Albarran started the construction of what would be the present church using hewn stone. The church was finished, 1739.
The facade blends Muslim, Romanesque and Neo-Classical features. It follows the classical pattern and is divided into two levels. Shallow pilasters divide each story into three segments decorated with stone bas-reliefs representing Augustinian saints. The bell tower serves as counterbalance to the opposite end. A triangular pediment crowns the solid, but not massive, facade. Attention is focused on the centre section. The trefoil arched main entrance is balanced by the side rectangular statued niches. The vertical composition is echoed by the small design on the second level above the cornice, the trefoil arch, the pediment and the side scroll-like ornament, a facade within a facade. A double-edged triangular pediment crowns the facade.