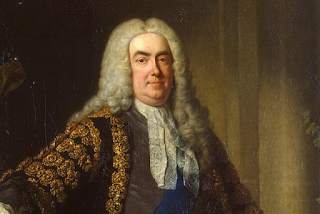 
The home of the British Prime minister, Number 10 Downing Street, was originally three houses. In 1732 King George II offered them to Sir Robert Walpole in gratitude for services to the nation. Walpole accepted on condition they would be a gift to the office of First Lord of the Treasury rather than to him personally. Walpole commissioned leading architect William Kent to join them together. Kent's plan was a masterpiece and this larger house is known today as 10 Downing Street.
Kent joined the larger houses by building a two-story structure on part of the space between them, consisting of a long room on the ground floor and several rooms above. The remaining space was converted into an inner courtyard. He then connected the Downing Street houses with a corridor, now called the Treasury Passage.
Rebuilding took 3 years. On September 23, 1735, the London Daily Post announced that Walpole had moved into Number 10: “Yesterday, the Right Hon Sir Robert Walpole, with his Lady and Family moved from their House in St James’s Square, to his new House adjoining to the Treasury in St James’s Park.”
The Walpole family did not enter through the door now so famous (not installed until 40 years later). However, like Number 10's famous door, Kent's was also modest, belying the spacious elegance beyond. Their new, albeit temporary, home had 60 rooms, with hardwood and marble floors, crown moulding, elegant pillars and marble mantelpieces; those on the west side with beautiful views of St James's Park. One of the largest rooms was a study for Walpole, 40 feet by 20 with enormous windows overlooking St James's Park. The room was and still is magnificent; its impressive size is easily seen in many paintings and photographs (virtual tour here). "My Lord's Study" (as Kent labelled it in his drawings) would later be famous as the Cabinet room where Prime Ministers meet with their subordinate ministers. A portrait of Walpole hangs over the fireplace behind the PM’s chair; the only picture in the room.
The total final cost of Kent's conversion is unknown. The original estimate was £8k but probably exceeded £20k, then a very large sum. The arrangement was not an immediate success. Despite its impressive size and convenient location, few early PMs lived there. Costly to maintain, neglected and run-down, it came close to being razed several times but survived and became linked with many of the great statesmen and events in British history. Gradually, the people came to appreciate its historic value.