Sir Brook Watson, Bart (1735-1807) was a British merchant, soldier and one-time Lord Mayor of London. He was perhaps most famous for being the subject of Watson and the shark, a painting by John Singleton Copley which depicted the shark attack on Watson as a boy. As a result of the attack Watson lost his right leg below the knee. More here. 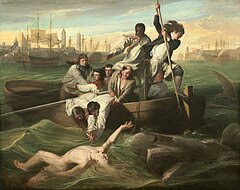