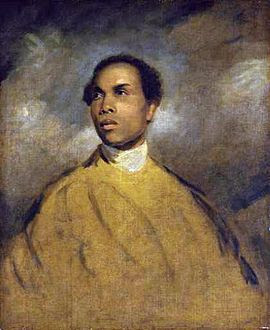 Francis Barber (ca 1735 – 1801) was the Jamaican manservant of Samuel Johnson from 1752 until Johnson's death in 1784. Johnson made him his residual heir, with £70 a year to be given him by Trustees, expressing the wish that he move from London toLichfield, Staffordshire, Johnson's native city. After Johnson's death, Barber did this, opening a draper's shop and marrying a local girl. Barber was also left Johnson's books, papers and gold watch. In later years he had acted as Johnson's assistant in revising hisfamous dictionary and other works.
Barber wasborna slave on a sugarplantation in Jamaica. Around the age of 15 he was brought toEngland by his owner, Colonel Richard Bathhurst, whose son, also called Richard, was a close friend of Johnson. He was sent to school inYorkshire. Johnson's wife Elizabeth Porter died in 1752, plunging Johnson into a depression that Barber later vividly described to Boswell. The Bathursts sent Barber to Johnson as a valet, arriving two weeks after her death. Although thelegal validity of salvery in England was ambiguous at this time (a later legal decision clarified that it did not exist in England), when the elder Bathurst died two years later he gave Barber his freedom in his will, with a small legacy of £12. Johnson himself was an outspoken opponent of slavery, not just in England butin the American Colonies too.
Barber then went to work for an apothecary but kept in touch with Johnson. He later signed up as a sailor, until retrieved, perhaps against his wishes, by Johnson, returning to be his servant. Barber's brief maritime career is known from Boswell's Life of Johnson. “
Later Johnson put Barber, by then in his early thirties, in a school, presumably so that he could act as Johnson's assistant.
Barber is often mentioned in Boswell and other contemporary sources, and there are at least two versions of a portrait, one now in Dr Johnson's House [see pic] which may be of him. Most recent art historians thought it was probably painted by James Northcote (painter of the shark incident I mentioned recently) or perhaps by Northcote's master SirJoshau Reynolds, one of Barber's Trustees under the will (and afriedn of Johnson). An alternative view is that it is by Reynolds himself, but of his own black servant, not Barber.
When making his will, Johnson asked Sir John Hawkins, later his first biographer, what provision he should make for Barber. Sir John said that a nobleman would give £50 a year. Then I shall be "noblissimus" replied Johnson, and give him £70. Hawkins disapproved, and after Johnson's death criticised his "ostentatious bounty and favour to negroes." The bequest was indeed widely covered in the press.
Barber's life in Staffordshire was unsettled and he was apparently given to drinking. He died inStafford; his descendants still farm near Lichfield.